I Confess: I Killed Thing 1 and Thing 2 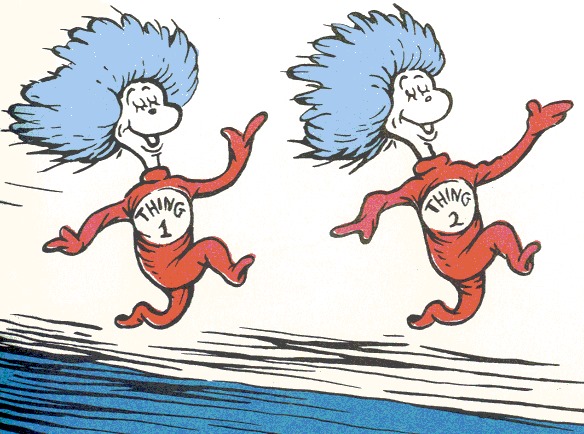 Thing One and Thing Two as they escape my consciousness

The Confession of Cindy Lou Who

Last night Thing 1 and Thing 2 agreed to withdraw from public view after attempting to smuggle hurtful and wrong images across the border of my consciousness. I knew they’d been there because when I awoke, I felt fear and confusion.

I sloughed off my feelings of dread and got dressed. I wore my pants backwards, 1960s Allan Kaprow style, just to prove the pandemic hadn’t got me down. That I’m avant-garde, even now. Pulling on a mask, I went out for newspapers and a cup of coffee from the corner deli and returned home. As I trudged up the stoop, glancing down the block and nodding through my mask at a wary neighbor, I remembered the carefree days of coffee shops and human contact. My mornings were lonely at home, with only the screaming headlines for company. Though the pandemic was waning, it hadn’t ended, and there was nowhere else to go. CDC recommendations, you know.

I found my usual place on the couch and sat in awkward communion with myself, the coffee cup warming my hand. I glanced at the newspaper. Could my nightmare be real? There it was in black and white: Seuss Enterprises was planning to do away with Thing 1 and Thing 2.

Do away with them? You mean expunge them? But … wouldn’t that change human nature as we know it?

Oh no, shouted the chorus, forget that old crap!

I confess I had a lazy attachment to human nature. But alas, the world had grown up, or at least moralistic, and it was time to put away childish Things. All mischief banned, a new pandemic generation would be safe at last.

Thing 1 and Thing 2 fade from view

A giddy feeling pulsed through my body. Some coffee slopped on my leg. An unsettling memory rose and then eluded me, swallowed in time. How frustrating! Why must they cancel Thing 1 and Thing 2?

Oh no, roared the chorus, nothing’s been cancelled, no one is banned. The Things have rightfully faded from view. What horrors they’ve caused—a change long overdue!

I thought it must be a joke. A wave of resentment surged, but I pushed it down. Sure, they would come back—as soon as they could, if I knew my Things. So I went along with the joke and coughed up a laugh as I thought of the death of Thing 1 and Thing 2.

Boy, was I due for a laugh! The pandemic would peter-pan out very soon—what more could possibly go wrong?

I prepared for a moment of long-lost glee, but my inner child was not amused—the creature I thought of as “Winston.” He’d been with me ever since I’d opened a dog-eared copy of 1984, way back in grade school. I admonished him, told him how important it was—how much depended on everyone getting the joke, or seeming to. He just groaned sadly as though I were the hangman with his smug crew.

“Winston,” I nudged, ever so slyly, “what harm can it do? Laughter’s recommended, if done when it’s due.”

But Winston was stubborn—the bastard refused! So I shoved him head-first down the memory hole tube. For a moment I feared the downdraft might drag me along; then my guts lurched, and I struggled. I managed to pull back and save myself.

Poor Winston. We’d been together for years. Not a couple, exactly, but close. Bonded, enmeshed, ball and chain—call it what you will.

No matter. Nothing lasts forever. And what is there to mourn, anyway? Winston was a bigot.

What, you hadn’t heard? Good lord, where have you been? He was as bad as they come.

Even so, I wonder what’s going to replace him. I feel an empty space, a cavern that’s opened in my soul. But it’s no use. He got what he deserved.

Excuse me a moment—I hear knocking. There’s someone at the door. Don’t go anywhere! 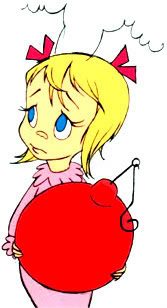 Cindy Lou Who as she confesses

This is terrific – when did it erupt? Hi.

Love this Sarah! Thank you!!

This is great! An amusing moment in time.