Protest for Human Rights: What’s Michelangelo’s David Got To Do with It? 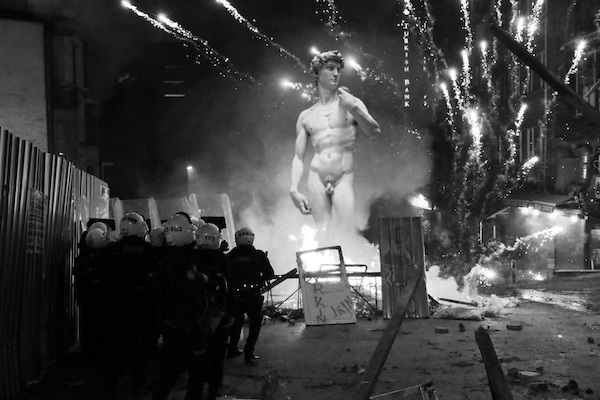 Today’s struggle for human rights has uncanny moments of déjà vu, as seen in a recent image from Turkey. Riot police confront the body of Michelangelo’s David, surging from the smoldering fires of a street protest. Freud defined “uncanny” experiences as simultaneously familiar and strange. In today’s struggles for basic freedoms and human rights, riot police are a common sight around the world. They conjure up the 1960s, when baby boomers took to the streets. Similarly, Michelangelo’s David is one of Renaissance Europe’s greatest—and most familiar—works. Yet, this image by photographer Engin Akyurt brings the police and the David together in a way that is unfamiliar and unsettling—uncanny. The police cower Lilliputian-like beneath the shepherd boy who looms, ready for war. Shouldering his slingshot, David ignores the awe-struck Lilliputians and goes to face today’s Goliaths.

And let’s not forget the razzle-dazzle of fireworks and the Turkish Bank sign glowing dimly against the night sky.

We can’t help admiring the uncanny figure of David, beautiful and warfaring. The Hebrew Bible presents him as harp player and younger son; warrior, rebel, and future king. He had the power of charisma, with its sexual energy. When Abigail, a local landowner’s wife, comes to David on a diplomatic mission, she falls for the rebel hero. As king, he dances uncovered before the Lord. In modern times, David’s friendship with Jonathan, son of King Saul, has made him an icon of the gay liberation movement. David captured the hearts of a strong female protagonist and a royal son; his powers were widely felt.

Engin Akyurt’s photograph of the David appears to show the aftermath of demonstrations that began in Istanbul’s Taksim Square. The 2013 Gezi Park protests began when the Turkish government moved to demolish a green space in central Istanbul. Officials proposed replacing Gezi Park with a shopping mall housed in a replica of an Ottoman-era military barracks. In response, young people occupied the park for days. Then, in the early morning of May 31, 2013, riot police attacked the encampment.

Commentators rightly saw the protest over Gezi Park as an Occupy-style movement. For me, however, it came as an uncanny reminder of 1969 and the struggles around People’s Park in Berkeley. I was young enough to be stamped—imprinted—by the experience of a city under curfew and National Guard occupation. For years I felt an emotional pull from those beautiful and bloody photographs of People’s Park. Eventually, feeling manipulated by those images of cops savagely uprooting flowers and trees, I rebelled against the imprinting. After all, I had absorbed those Berkeley Barb photographs like the Marlboro ads on TV.

The face-off between the cops and the David underscores a gender-bending aspect to recent protest movements. While searching for information that could help me identify when and where the photograph was taken, I found a video filmed in Turkey. It showed police breaking up Istanbul’s 2019 gay pride march. In the space of a few moments (beginning at 10:15 in the linked video), I saw young women from the gay pride march, wearing shorts and sleeveless blouses, machine-gun-toting policewomen, and middle-aged women in traditional clothing and headscarves.

I was glimpsing a world that, for women, was even more topsy-turvy than the one I remember from 1960s Berkeley.

Meanwhile, there’s the David—that photoshopped symbol of youth called to battle against the world’s Goliaths. In this age of #MeToo, here’s my question: Is the world ready for Michelangelo’s Abigail?

Home  »  Blog  »  Protest for Human Rights: What’s Michelangelo’s David Got To Do with It?