Of Masks and Masquerade: The Treacherous Streets 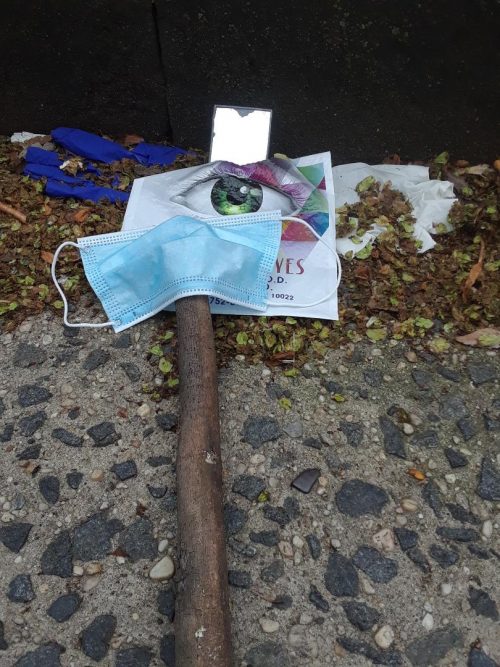 When I leave my apartment these days, there’s that nagging thought: could I become a murder weapon? Could I be asymptomatic and unknowingly infect someone? And so I put on my mask and walk the uncrowded streets. I go forth armed against the deadly anarchy of the everyday, the damage I might do merely by breathing.

The mask no longer seems surreal. To be honest, though, I delayed wearing one. They were in short supply, and there were people who needed them more than I did. But after a couple of people cursed at me on a nearly empty Brooklyn street, I put on a mask.

In my Park Slope neighborhood, fear and vigilance police the streets. The pandemic has assaulted our feelings of safety and collapsed our personal space. My space now ends at the edges of my mask, where my breath mingles with the world. As boundaries collapse, I become prey to confusion, flight, and barely suppressed anger. I’m not lashing out just yet—after all, I’m a decent person. The veneer of civilization clings to me. Even so, the pandemic is messing with my mind.

I can speak only for myself. Danger is seemingly everywhere. It’s reflected in the eyes of passersby. But when I look around for the source, there’s only the peaceful street. What danger is there in the wind? And where is it coming from? Me. You. That Annie Oakley over there refusing to wear a mask!

Yet the research says no.

And here we are, mask-to-mask on the street corner, suddenly sharing the strangeness. Cringing from the fresh spring air even as we agree that it’s safe to say hello.

We animals have what biologists call a “flight initiation distance”—the distance at which we normally flee an approaching danger. Researchers study the phenomenon by approaching birds in the woods or frogs around a pond, measuring how close they can get before the animal takes off. For most of us, there’s a sweet spot in this calculus. If we abandon ground too soon, we waste our chances and our energy. But if we linger in the face of danger—well, you know how that ends.

These days, my danger calculus has gone haywire. Safety means stay away from me—far away. Over the rainbow sounds just about right. Meanwhile, moving through the streets is a whole new game. Like walking the big city for the first time or learning to get by in a second language, it’s exhausting.

I go to the nearby park, where a new order struggles to be born, as people improvise new values, new limits. Some wear masks; others do not. Most walk alone or in groups of two or three, keeping a watchful separation from others. A few engage in strange experiments. I pass a couple doing yoga on a blanket while their pet rabbit sits calmly on the grass nearby. Another couple has strung up a hammock and crawled right in, as though Pandemic Park belongs to them alone. And then there’s the group of mothers and kids hanging out in an impromptu playground—a muddy grove.

Home alone, it’s easy to get wiggy. I go outdoors to see the world—and even bump against it—when I want to escape the ghosting dance of the computer, its ephemeral faming and shaming. The up-against-it streets are the real deal, where it’s clear we have no common enemy and no one to blame. And yet, in this ambiguous war in which there’s no real camaraderie, no safety in numbers, it’s so easy to blame each other.

Humbled by my mask, I do not parade through the park—I slink through it. The word “frenemies” seems made for these times, as I struggle with the simplest of human responses: Do I know that woman in the gardening clothes? How dangerous are we to each other?

Lost in a Masquerade

When I see so many people in masks, I can’t help thinking of mardi gras, the revel that for centuries has marked the beginning of Lent. Grasping a temporary freedom, people throw off everyday roles and masquerade through the streets. Scenes of folly and unmasking are sure to follow. This year’s mardi gras celebrants spread the pandemic freely. They helped beam us down to earth, a place known for consequences—and back to a premodern era we thought we’d forgotten. Seeming to offer a taste of wild freedom, this year’s masquerade has shrouded the world in a permanent Lent.

I’d forgotten humility, but now the rude slap of nightmare has jolted me awake. I glance around the four walls of my castle, still groggy from my cosmopolitan dreams. On the computer screen, I see non-human creatures emerging all around the world, like ghosts refusing to flee the daylight. A bat virus. A herd of sheep in a MacDonald’s parking lot. Jackals in a city park. Just as human domination was reaching its endgame—or so it seemed—I’m newly engulfed in premodern problems. Disease, contamination, containment, quarantine, cleansing. The danger of touch—any touch.

The pandemic world may come and go. It’s happened before. Yet we’ve created a global contact zone—and what if there’s no escaping it? We’ve embraced the hypermodern world of digital wonders as a refuge from our grounded but scary streets; it offers freedom, or so we claim, from our contaminated world—even from breath itself.

Mind and body. The split that binds. In the looming separation, one of them will lay claim to me. But then I remember: we come from both and belong to both.

Sarah, this is such a beautiful reflection on the confusing state in which we exist. Thank you.

Home  »  Blog  »  Of Masks and Masquerade: The Treacherous Streets