Coming of Age as Simone de Beauvoir: From Catholic Schoolgirl to Avant-Garde Rebel 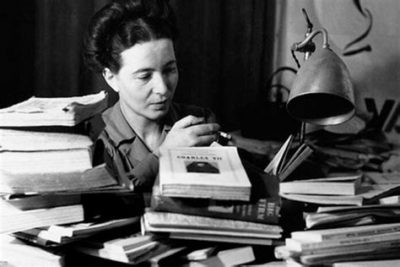 Coming of age in early-20th century Paris, Simone de Beauvoir (b. 1908) transformed herself from a devout Catholic schoolgirl into one of the foremost intellectual rebels of the 20th century. Energetic, probing, in search of commitment and deeply suspicious of the compromises of bourgeois life, she became a major figure in 20th century philosophy. Her subject? Liberty and contingency—choosing and being chosen for; transcendence and immanence.

Beauvoir’s groundbreaking 1949 work, The Second Sex, applied the concepts of liberty and contingency to the study of women. Declaring that “One is not born but becomes a woman,” she developed the concept of woman as “the Other,” analyzing its implications for philosophy, literature, and aspects of everyday life—including coming of age.

Though Beauvoir’s approach was highly original, it was also embedded in its mid-20th century moment. It paralleled the work of writers of African descent—including Richard Wright and Frantz Fanon—who were using philosophy and psychology to explore the experience of racially marginalized groups. Without definitively rejecting philosophy’s universal claims, these writers were challenging philosophy to deal with the experience of society’s outsiders.

Avoiding easy analogies between women and racial minorities, Beauvoir’s perspective in The Second Sex is both philosophically subtle and steeped in women’s everyday experience. The world was perplexed and amused by the seeming paradox—a philosophizing woman. It was also outraged by the author’s sexual candor.

Along with her philosophical works, Beauvoir created a steady stream of memoirs and novels. Liberty and contingency are ever-present, as humans struggle to stand out against circumstance: world war, fascism, oppression, and “othering.”

Privately, Beauvoir’s writings on women, gender, and sexuality were informed by her decades-long open relationship with philosopher Jean-Paul Sartre, sealed by their famous pact to tell each other “everything.” Together they analyzed the intimate details of the liaisons dangereuses they formed with others, including several young women whom they both seduced. Some of these ménages à trois were deeply unsavory—a torment for the young women relegated to supporting roles in the Sartre-Beauvoir “family,” and passed between the sexually investigatory and unscrupulous couple.

Feminist philosopher, atheist, and sexual nonconformist, Simone de Beauvoir began life in a gilded cage, a plight she chronicles in her coming-of-age book, Memoirs of a Dutiful Daughter. For such girls, a large dowry—not learning or talent—was supposed to smooth the way. Mothers and teachers enforced sexual ignorance, and arranged marriages were common. For those seeking a way out, the convent beckoned.

Beauvoir was not made for a gilded cage—the conventional roles of wife and mother that her class, her family, and her rigid Catholic upbringing assigned to women. From an early age, she was a person of spiritual searching, restless intellect, boundless energy, and emotional extremes. 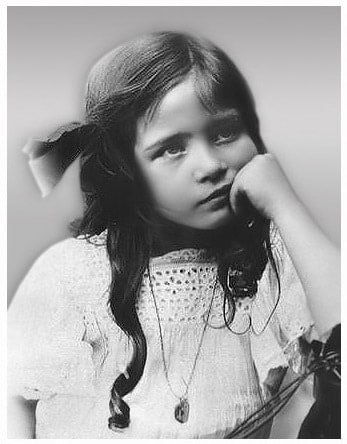 Simone de Beauvoir as a child

In 1913, when Beauvoir was five years old, her parents enrolled her in le cours Desir, a private Catholic school for the chaperoned girls of the upper-middle class. Then came the trauma of World War I. As ideals crashed and burned and an age of mechanical warfare began, accompanied by the Bolshevik Revolution, the destruction of the war years gave way to the desperate improvisations of a young and uprooted generation.

L’Action française, a far-right monarchist movement with which Beauvoir’s father sympathized, sparred with the Catholic Church, which claimed the allegiance of her teachers and her closest friend’s family. Both L’Action française and the Catholic Church denounced the avant-garde culture that fascinated Beauvoir—godless intellectuals, surrealists, and immoralists, those who sought the sting of life in dissipation or the “truly gratuitous” act.

During the war years, young Simone swooned over the ideals of God and country, pleasing her mother and teachers; Papa encouraged her clever accomplishments at le cours Desir. Then circumstances changed. The war damaged the Beauvoir family’s financial status, and they faced genteel poverty—a life of unheated apartments and straightened means, marital squabbles, and dashed hopes for Simone.

Her dowry gone, she could no longer expect to marry well. Though her father was no feminist, he was concerned for her future and encouraged her to enter the civil service, where she would earn a fixed salary and a pension. Beauvoir resolved to teach in a lycée, but though her father agreed, her teachers at le cours Desir were scandalized: “To them a state school was nothing better than a licensed brothel.”

Coming of Age: Between the Library and the “Licensed Brothel”

Simone responded with fervor, immersing herself in academic labors with a single-minded zealotry that shocked her conventional parents, her teachers, and the parish priest. Solitary, yearning, prey to sexual stirrings, and grandly ambitious, she began to neglect her appearance, her family obligations, and God in a passionate search for Truth.

Adults regarded Simone as slightly mad—and indeed, the figure she cuts during late adolescence owes something to her famous predecessor in gender rebellion and psychological extremes: Jeanne d’Arc.

Young Simone had dreamed of becoming a nun; now, rushing headlong toward her coming of age, she measured her parents’ shortcomings, and God’s: “If I had rediscovered in Heaven, amplified to infinity, the monstrous alliance of fragility and implacability, of caprice and artificial necessity which had oppressed me since my birth, rather than worship Him I would have chosen damnation. . . . I thought it great good luck that I had been able to get away from Him.”

Having renounced God, Beauvoir also refused the roles of well-bred daughter and wife. It’s not hard to see why. Her parents and teachers censored her reading, and her mother had long kept her in sexual ignorance. The woman who made the famous pact with Sartre reached adolescence not knowing where babies come from—though she doubted they came through the chimney.

Poorly dressed and somewhat déclassé, Beauvoir had no hope of competing­­­—nor was she free. At age 19, she had to beg her mother to stop opening her letters. Her closest friend was so desperate to escape family demands that she cut her own foot with an axe.

For Beauvoir and other rising intellectuals of her generation, the assumptions and conventions of prewar Europe had been swept away. Like her cousin Jacques, a cultured but boozy young man, Beauvoir regarded bourgeois domesticity as full of spiritual and intellectual peril. For women especially, it loomed as a dangerous trap. She celebrated her twentieth birthday by writing in her diary, “Dementia praecox would be a way out.”

For several years, cousin Jacques seemed to offer another way out—a love match, a compromise. But despite encouragement from both families and some adolescent longings on Beauvoir’s part, he played another role altogether—that of male guide and corrupter. Trusted as a chaperon, he contributed to her coming of age by giving her books by André Gide and Jean Cocteau—and by leading her through a night of bar-hopping and debauchery that bound her to him “by an indissoluble complicity, as if we had committed a murder, or crossed the Sahara together on foot.”

Such adventures were hardly the prelude to a marriage proposal. Soon Beauvoir was frequenting Montparnasse bars alone—and the one she preferred was the Jockey, a hangout for prostitutes. 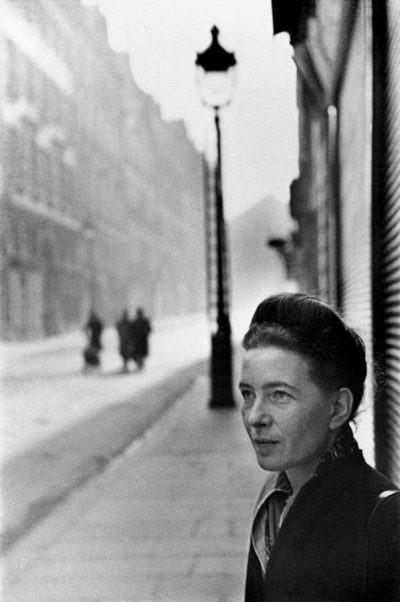 Formed at le cours Desir, Beauvoir thought of sex in the vocabulary of sin and vice. If she was amused by the raw, overt sexuality of the Jockey regulars, that was because she refused to grasp its human meanings. Seeking “life” and completely at odds with authority, she found a temporary home there, where she indulged in ludicrous antics.

One evening, Beauvoir took a wild chance and accepted a ride from a man; when he demanded sex, she was forced to escape by jumping from the car. Gide, the surrealists, and cousin Jacques had taught her the principles that would guide her future—live dangerously, refuse nothing. But having come of age in sexual ignorance, she was not yet choosing, because choice implies knowledge. Catching the last Métro home, Beauvoir took solace in her dangerous caper as Jacques might have done—she congratulated herself for having performed a truly gratuitous act.

Simone de Beauvoir, Memoirs of a Dutiful Daughter and The Second Sex

Too often known only for The Second Sex, a seminal history on the treatment of women through the centuries, de Beauvoir’s novels offer the reader complex and intriguing characters who guide us through a labyrinth of fantastical time travel through history in search of wisdom and a resolution to unrequited love (All Men Are Mortal); a close-to-real life search for the role of intellectuals — and relationships — in the confusion following WWII in Paris (The Mandarins). Look to de Beauvoir’s novels. They offer a rich tapestry of French bourgeois rebellion, history, and deep personal exploration. Here, Sarah Relyea offers… Read more »