Baby Boomers in COVID Time: Nothing Has Changed, and Nothing Is the Same 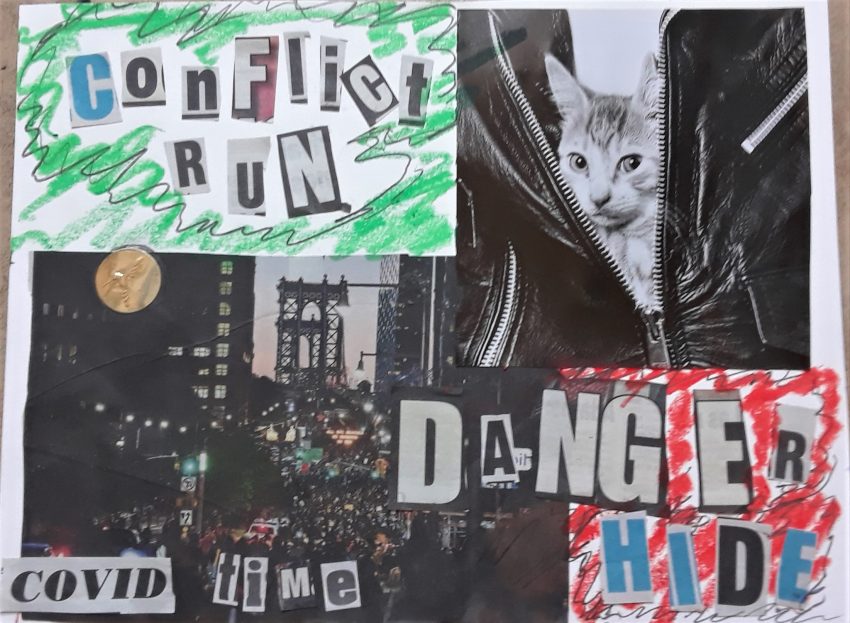 During late January 2020, the ongoing scandals and impeachment efforts focused on Donald Trump dominated America’s political landscape. Calls for impeachment had begun early, even before Trump’s inauguration; three years later, impeachment was finally in full swing, upstaging the 2020 primary season. If the proceedings felt oddly irrelevant, it was because everyone assumed, correctly, that the Republican-dominated Senate would vote to acquit.

China, So Far Away

Meanwhile, alarming reports were emerging from China. A novel flu—or was it much worse?—was raging through Wuhan, and the Chinese government had quarantined fifty million people to control its spread. In some cases the government had sealed the doors of homes, eliminating any chance of escape. I struggled to imagine such heavy-handed enforcement. After all, I’d never been caught in a major pandemic. The months-long house arrest of whole populations seemed clearly outrageous.

From my home in Brooklyn, I followed the big news—impeachment. Were we not fighting for our Constitution, our Bill of Rights? Many Americans, engaged in work, school, and the struggles of life, encountered the hearings as they encountered so much else—as pro- or anti-Trump memes. Lacking a simple moral or a clear connection to Donald Trump, the mind-boggling news from Wuhan was easy to ignore.

Germs on the Move

As we hung on the words of ambassadors and State Department officials—fighting Trump’s tyranny, we proclaimed, in a flood of Facebook posts and Twitter declarations—an army of germs was on the move. Compared to these hackers and hijackers, we and our enemies were so many bumbling fools. Yet, reading the reports from Wuhan, I remember feeling smug. “China is far away,” I thought, as though we were safe—as though our Bill of Rights made us immune. Trump was the problem, no? “Americans have rights—we’re fighting for them! And anyway, who would comply?”

By mid-February, impeachment was an undone deal. The army of germs—spread from bats, the Chinese government announced, helpful as ever—was already marching through Iran and Italy, overwhelming populations far from Wuhan.

At home in Brooklyn, I had other concerns. After all, my novel Playground Zero would be coming out in June. Who wanted to think about a surging pandemic, or government-enforced imprisonment in a small city apartment?

Even as I was fooling myself, the germs were busy. A few people had begun wearing masks in public. Church members were unwilling to shake hands while passing the peace. A fellow congregant’s husband went into the hospital and emerged with a flu that nearly killed him.

By March, the pandemic had overrun the world, and fear was everywhere. On March 5, I took the subway to a Beethoven concert at Carnegie Hall, one of three unnecessary outings that week. During the subway ride home, two Russian guys leaned over me, talking—breathing on me. An announcer kept warning us to wash our hands. Fear gripped me: how could I have been so careless?

The following day, I began coughing and wheezing. It was just a cold, I reassured myself. Allergies. Seasonal flu. Anything but the pandemic.

From March through May, we crammed our heads with thoughts of death, contagion, furloughs, unemployment, and incompetent government response. Jobs, schools, and houses of worship; bars, gyms, and playgrounds—all gone. Shops and restaurants closed as though for the off-season, turning city neighborhoods into ghost towns. Summer was coming—no swimming pools, no summer camps, no sports. Closed … and for how long? No one could say, as the pandemic raged through the country and the world.

Ambulances screamed through my neighborhood. Masked and fearful, I slunk along the contaminated streets, judging the masked passersby while they—especially my fellow baby boomers, the vulnerable demographic—judged me.

There was nothing I could do about the pandemic. I could wear a mask, of course, but nothing more. I was no nurse. I couldn’t soothe my partner’s jangled nerves, and other family members were far away—if we were even on speaking terms. Everyone I knew was suffering—footloose in confinement, unemployed, depressed. Others were scrambling to adapt. Day by day, the world was collapsing.

On Memorial Day weekend—days before the release of Playground Zero—a black man in Minneapolis was killed by a policeman during a misdemeanor arrest. Americans responded to the death of George Floyd with outrage, jolting the country from tragedy to tragedy.

Sins of the Fathers

Awareness of white America’s greatest sin, and black America’s greatest ordeal—the long nightmare of slavery and Jim Crow—was suddenly the only thing left uncancelled. Awakening from the pandemic as though from a coma, we heard angry condemnations of racism and white supremacy. Confronted by unspeakable crimes, many people were angry or ashamed; others were infused with righteous purpose. Together we blamed the cops for our tragedy—and the world’s. The pandemic was novel and unimaginable, but racism was an old and ugly scar—a long-running tragedy we baby boomers had sworn to eliminate long ago.

There was nothing ambiguous about the killing of George Floyd. Maybe he’d been argumentative in the beginning, maybe he’d been flailing his arms, maybe he was on fentanyl. But watching the video, reasonable people found they could agree: the cop was a murderer. He’d kneeled on Floyd’s neck for nearly nine minutes. Floyd was handcuffed, and he’d gone unconscious—no longer complaining of claustrophobia or calling for his mother or saying, “I can’t breathe.” Someone from the crowd could be heard pleading, aghast at seeing a man’s life ebbing away, caught and released in the time bomb of a video camera.

I’d been at home for ten weeks, going out only for food and walks on uncrowded streets. Oh yes, and coffee from the Yemeni guys at the bodega. If I’d been a smoker, like George Floyd, I probably would have gone for cigarettes, too. Life in a pandemic can spin out of control pretty fast—though in my case it would have been germs, not cops. My neighbors. A coffee cup. My tendency to rub my eyes.

Rebelling against both cops and germs, protesters by the thousands emerged from lonely homes, seeking a communal release. Shaking off the pandemic—with its creepy taboos from a world beyond our control—we surged through long-abandoned streets and gathered shoulder-to-shoulder, shouting through our masks. Our cause was just; there could be no doubt. The streets belonged to us as never before. There was no one impeding or opposing us—no cars or shoppers or shopkeepers. Only us and the enemy—the police.

Crowds are common enough. So are mobs—and mobs are simply crowds when they’re in a surly mood. In the 1960s, James Baldwin warned of America’s dangerous self-delusions—its myths of innocence; its sexual hangups; its lynch mobs. During the 1920s and 1930s, when Baldwin was young, white mobs were seeking black men to lynch. In some Southern states, crowds would gather for a lynching, cheering or enjoying a picnic while the victim was hung and set on fire. During the early days of the Civil Rights movement, angry white mobs had barred black people from schools and dragged them from Jim Crow lunch counters.

But by 2020, many things had changed. The germ-defying crowds—black and white together—were demanding murder charges against a white cop.

Night fell; and another nightmare began. Antifa and white supremacists, gang members and teenage hangers-on all demanded an hour on the stage. Mobs poured through pandemic-soured neighborhoods, smashing and looting with the casual abandon of a marauding army. The enemy had been shamed and brought low, and for now groups of young people—who’d lost so much to the pandemic—had found a purpose. The whole world was watching as America tore off the mask. 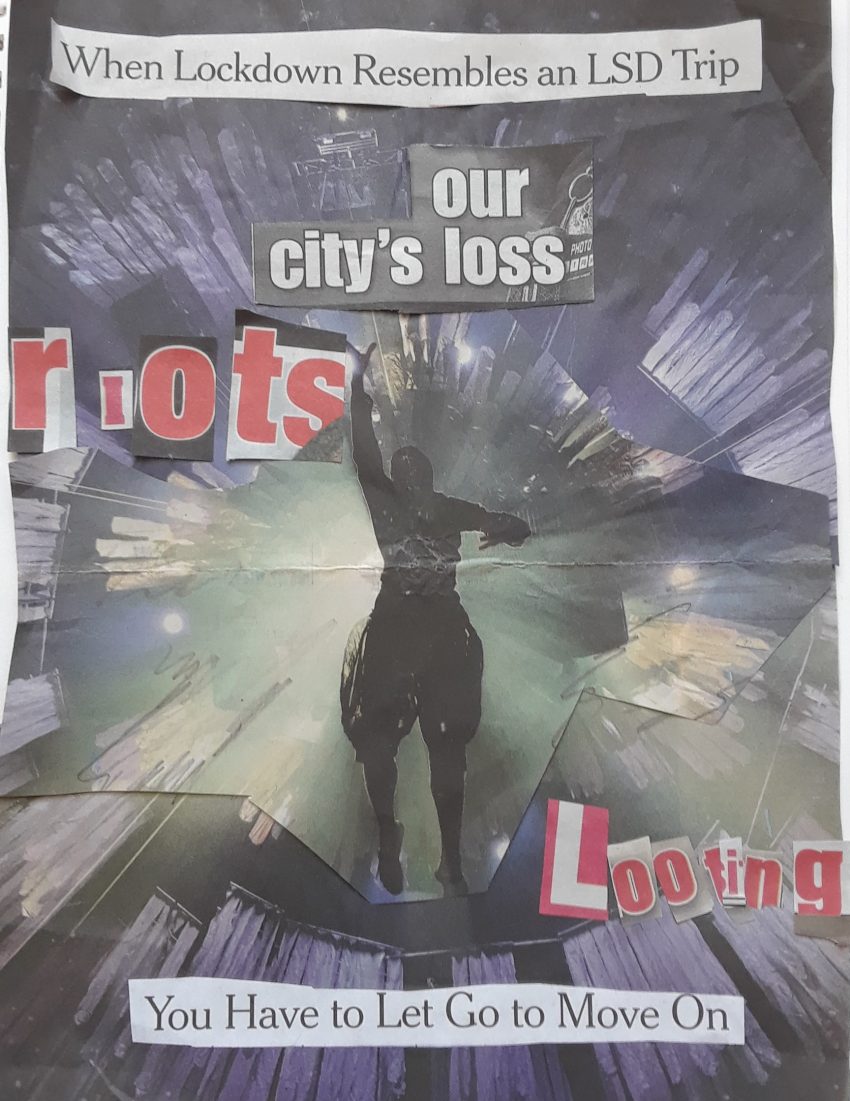 You have to let go to move on. Collage by Robin Epstein.

Awesome, Sarah. Our conversations on the stoop become clearer after reading your piece. We need more of this to keep our perspective.

Home  »  Blog  »  Baby Boomers in COVID Time: Nothing Has Changed, and Nothing Is the Same